The complete collection of Vacation movies, starring
Chevy Chase and Beverly D'Angelo! The first three were
written by John Hughes who also wrote for National
Lampoon(the magazine)! John did not write the fourth
movie, Vegas Vacation, so the National Lampoon moniker
was dropped! 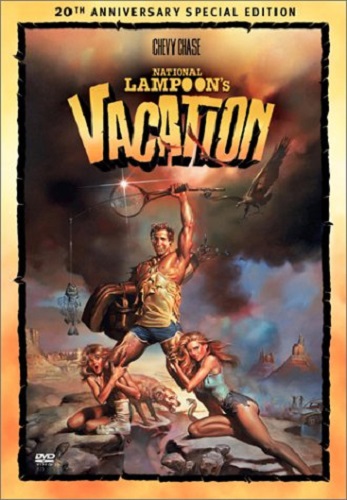 A pretty funny movie, which introduces us all to
the Griswolds, a family that just wants a vacation
at Wally World! They take a car trip from Chicago
to LA which turns from one disaster to another!
Some pretty memorable happenstances, along
with several good jokes! Not Airplane-esque,
but fun! B+

A review from an IMDb.com customer:

This is one of those movies that i loved when
i was younger so i really didn't know what to
think as i watched it again. But to my surprise
it is still charming, funny and sweet. Enter
Chevy Chase as the last family guy, just wanting
to spend time with his loving family. A hilarious
journey from Chicago to California to get to an
amusement park. You may think, that shouldn't
be a problem, but it is. This is one vacation you
will never forget. I have always liked Chevy Chase
and if you watch this movie you will know why.
The sweet caring family man losing more and
more of his mind is nothing less than funny as
hell. Maybe you will think twice about taking
your family on vacation after watching this
movie. I rate this movie 7/10 - udeaasykle 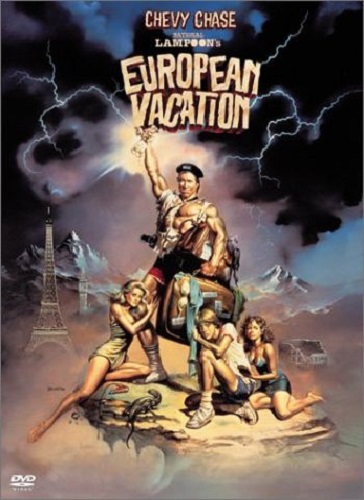 This one was quite a drop from the original, with
the only returning actors being Chevy and Beverly!
Story is ok(the Griswold's win a European vacation
on a game show, and they proceed to have about as
good of time here as they had getting to California
in the first NLV! Story is weaker, acting is weaker,
the scenery is great and the music is good! C+

I'm surprised by all the negative comments - this
was the first National Lampoon movie I saw, so I
came to it fresh. OK, so it's not a great work of
art, but I thought it was side-splittingly funny in
places, and cleverly parodies all the national
stereotypes that people tend to use.

As a great fan of visual humour, my favourite
moment in the film has to be the scene where,
having had all their clothes stolen, the family
go shopping in a boutique in Italy and emerge
on to the street dressed in absurdly over-the-top
designer creations. It really is one of the funniest
sights I have ever seen in a film. I defy anyone
with a sense of humour not to laugh. - Tim Davison

OMG! What a bad movie! This one has nearly no humor
til the end of the movie! Almost no heart as in the first
two! And almost unbearable bleakness throughout the
the whole movie!! Returning are Chevy, Beverly and
Randy Quaid! A real waste of some really great talent,
with Diane Ladd, E.G. Marshall and Doris Roberts
co-starring! Tough one for me to get through! C-

This movie is one of those where they take a typical
family gathering and make it as funny as possible.
They try to make funny scenes and have it be a comedy.

Unfortunately I didn't really find it that funny at all.
There are a few funny scenes but in general I dislike
it. One of the first reasons is the swearing. Bad mouth
after bad mouth. Not just the adults but the kids as
well. Really?

Second is the sexual content. It's bad enough to have
a scene where the guy implies breasts... but to have
a whole scene dedicated to a swimming pool where
the girl who he saw at a store is in a swim suit and
sexually tries to encourage the guy to 'come along'
and goes as far as implying she's completely undressed
is just... yeah.

But in general I think the movie could have potential.
But it really is ruined when I have to close my eyes
every few minutes. 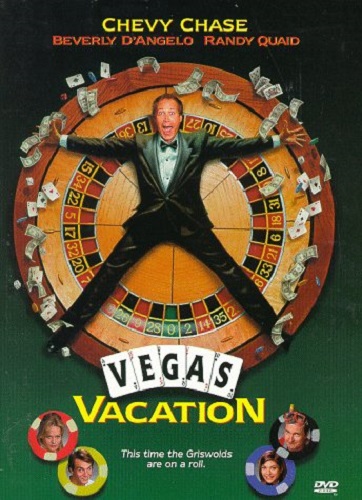 This is the best of the Vacation movies!!! With a
fun story, great setting(Vegas), great co-stars
including Wayne Newton and Siegfried and Roy,
this movie is much faster paced than the previous
2 movies with a wonderful ending! A fitting end
to the Vacation movies!! B+

A review from an IMDb.com customer:

I thought that this one was the one of the best
movies from the "Vacation" series. It's really funny,
and it was pretty cool to see Audrey and Rusty
all grown up! I loved the characters, especially
Shae D'Lyn's character, Vicki, the Vegas stripper,
who Audrey hangs out with, and when Randy ends
up as professional gambler and Vegas icon, Nick
Papagorgio. Ellen, played by Beverly Dangelo,
ends up being lured by Wayne Newton, while
Clark becomes seduced by the thought of BIG
fortune. Also, you have old friends like Randy
Quaid's totally gross, but funny Eddie and his wife,
Catherine, and many more! A great movie for
laughs! - :o) Katriel