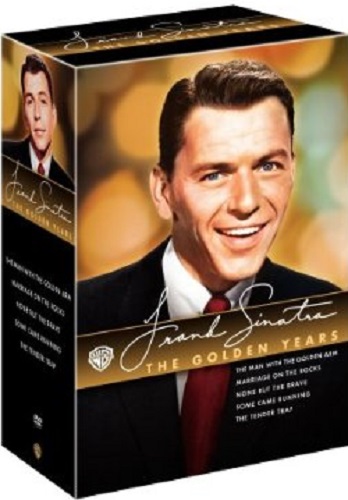 Ol' Blue Eyes in 5 movies I've never seen! As a
plus, two of these also feature the great Dean
Martin!! The first three of these movies has a
special on the making of, or information about,
Frank Sinatra and that particular movie! 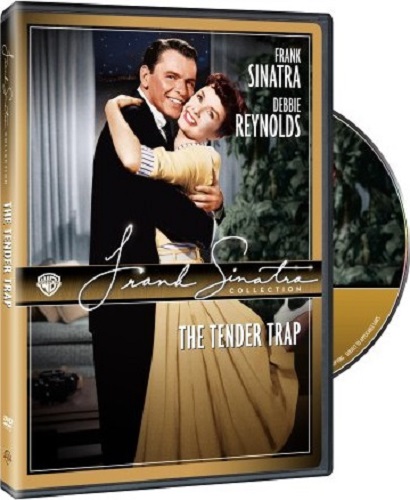 This is a very fluffy movie! By that I mean that
there isn't any Earth shattering revelations, no
Oscar winning performances, and the story
is just a basic romantic comedy of the 50's!
However, this is pretty entertaining, as Frank
has some pretty good co-stars here, including
the very pretty Debbie Reynolds and the very
good actor David Wayne (he was Jim Hutton's
dad in the TV show "Ellery Queen")! A fun little
show with just the right amount of singing by
both Frank and Debbie! B

It's the total ring-a-ding lifestyle: hep Manhattan
pad, fishbowl-sized martini pitcher, and a long
list of female companions. Then swinging bachelor
Frank Sinatra has his style cramped by a chaste
and very organized young Debbie Reynolds. Her
detailed blueprint for courtship and marriage
forms The Tender Trap's supposedly comic premise,
although the results are fairly tepid. Even those
expert supporting players David Wayne and Celeste
Holm, as Frank's best buddy and most loyal girlfriend,
don't have their usual zing. The stage origins of
the material are all too evident, with much of
the action set in Sinatra's enormous apartment
(which is worth a look for future archivists trying
to re-create an era). There's the Oscar-nominated
title song, of course, which is still a dandy--and
you'll hear it about five times, including a pre-credits
sequence with Sinatra (apparently as himself,
not his character) crooning to the camera. --Robert Horton 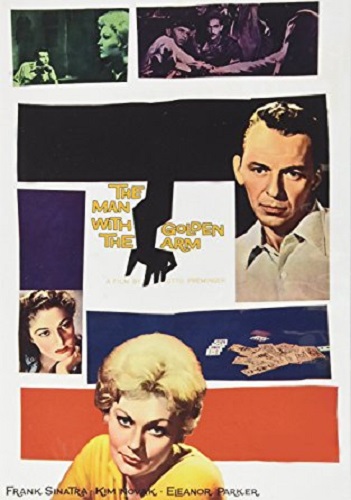 The Man With the Golden Arm(1955) If the first film is fluff, this one is totally the
other direction! Frank plays a former drug
addict and dealer for an illegal poker game,
trying to go straight after a stint in drug rehab.
There are many obvious obstructions to his
resolve, not the least is his wife who is "confined"
to a wheel chair after a car accident in which
Frank was the driver! This is a very well done
movie, if not very disturbing! Not a film I would
watch over and over, but certainly one worth
a watch! B+

When Frankie Machine (Frank Sinatra) comes
back to the old neighborhood after a spell in
the big house, he wants to stay straight and
become a drummer. But his old life--as a poker
dealer and heroin addict--comes rushing back
to meet him. The subject matter of Nelson
Algren's novel was still shocking in 1955, and
The Man with the Golden Arm was released
without the seal of approval from Hollywood's
Production Code. The director, Otto Preminger,
used the controversy to whip up interest
in the film, and his championing of non-Code
pictures such as The Moon Is Blue and The
Man with the Golden Arm helped end the
influence of the restrictive policy. For Frank
Sinatra, the role was a high point; his
performance is searching, honest, and
(in long scenes of going cold turkey to
kick the habit) frighteningly naked. He's
touchingly matched with Kim Novak, in
one of her best performances; adding a
bit of method-acting madness is Eleanor
Parker as Frankie's hysterical wife. Sinatra
was nominated for the Best Actor Oscar,
but lost to Ernest Borgnine--the same guy
who beat him senseless in From Here
to Eternity. The propulsive jazz score is
by Elmer Bernstein. Even the credits
sequence staked out new territory: the
mod images created by Saul Bass were
among his first in a long standing
collaboration with Preminger, and
were highly influential on other
designers. --Robert Horton 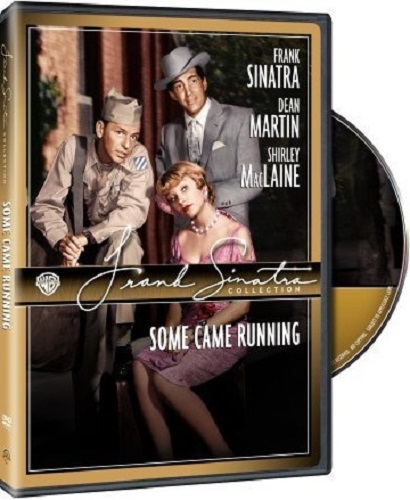 Some Came Running(1958): A small amount of humor here can't really
offset the drama of this movie! And even
though you know all the way through the
movie how it has to end, you still get sucked
in! This is not a comedy! And a pretty good
movie at that! It's fun to see Dino and Frank
working together! B

The first time Frank Sinatra acted in an
adaptation of a James Jones novel, he
won an Oscar--it was in From Here to
Eternity. The resurgent Sinatra found
one of his best subsequent roles as a
bitter, boozy failed writer, the hero
of Jones's Some Came Running. Returning
to his hometown in the Midwest, he runs
into the rampant hypocrisy of the "good"
life, as embodied by his insincere brother
(Arthur Kennedy). Sinatra the cynic plumps
for the company of a floozy (Shirley MacLaine)
and a misogynist gambler (Dean Martin),
while making a desperate bid for the affection
of a strait-laced teacher (Martha Hyer).
Director Vincente Minnelli (Meet Me in
St. Louis) infuses the material with a
slow-burning tension, and the climax
at a carnival is an eye-filling piece of
orchestrated chaos. Elmer Bernstein's
moody score is another plus. Footnote
to film history: the hero of Jean-Luc
Godard's Contempt says he wears his hat
in the bathtub as an hommage to Dean
Martin in Some Came Running. --Robert Horton 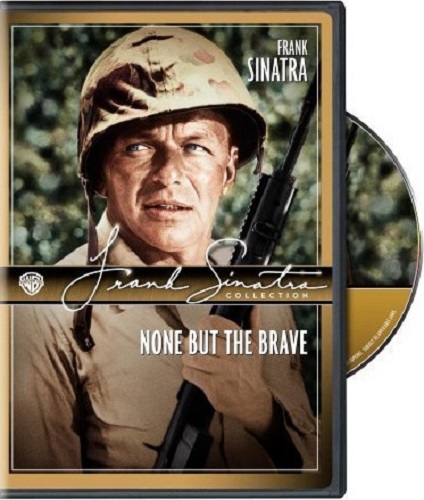 None But the Brave(1965): A very good movie about two militay leaders
(Clint Walker and Tatsuya Mihashi) who start
as enimies, then become friends even though
the ending is clear to both! And as the ending
says, Nobody Ever Wins! B+

Frank Sinatra had a strong movie career for
years, but he only directed one film: None
but the Brave, a 1965 anti-war picture that
turns out to be much more interesting and
compelling than its reputation would suggest.
On a remote Pacific island, a plane carrying
U.S. Marines crash-lands, setting up a tense
stand-off with the overlooked Japanese
contingent already there. The two sides
mirror each other, and eventually a nervous
truce takes place. There are many unexpected
choices here, including Sinatra's casting of
himself as merely part of the ensemble, a
weary pharmacist's mate who--in the film's
most riveting sequence--must perform an
amputation. The movie's narrated by the
Japanese commander (Tatsuya Mihashi),
and the Japanese actually speak their own
language (well, except for the narration)
instead of accented Hollywood English.
Sinatra's good in it, and so is TV star Clint
Walker, a big he-man with a quite approach.
(Tommy Sands, then Sinatra's son-in-law,
gives a broad but amusing performance
as a nerdy by-the-book officer.) The film
bears the influence of Bridge on the River
Kwai with a little Mister Roberts thrown in,
but it has a bitterness about war that goes
all the way through to the forceful final
title, a reflection of Sinatra's liberal views
at the time. Clint Eastwood got a lot of
credit for making two films that showed
WWII from the American and the Japanese
sides, Flags of Our Fathers and Letters
from Iwo Jima, but in a way Sinatra had
already done it, and in one movie. It's not
a major film, but an honorable effort, and
it predates the rash of anti-war counterculture
movies by a few years. --Robert Horton 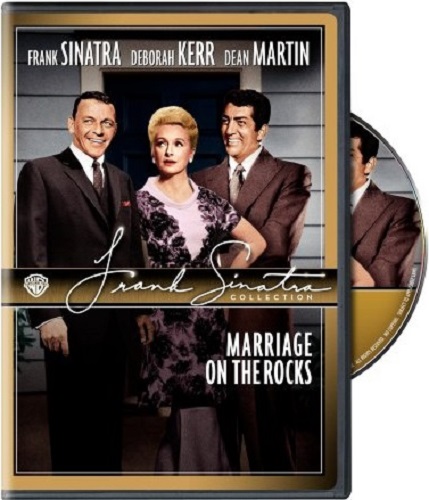 Marriage On the Rocks(1965): Frank and Dean together in a pretty funny film
about a man and a woman who just don't know
how good life is for them, but have a friend
willing to try and show them! As a little bonus,
this movie has Cesar Romero(The Joker in The
Batman TV series), Nancy Sinatra (Frank's Daughter
and singer["These Boots", "Summer Wine"]) and
the wonderful DeForest Kelly(he's dead Jim!!) in
it!! B+

This time capsule from a bygone era features
an amazing Dean Martin bachelor pad and the
delectable sight of Frank Sinatra go-go dancing
in a rock club. Such campy pleasures are the
main appeal of Marriage on the Rocks, a
sitcom-style comedy about marital dissatisfaction
and legal confusion. Sinatra's been married
to Deborah Kerr for 19 years, but her boredom
with his stick-in-the-mud personality has her
leaping to shake things up--especially when
a Mexican vacation accidentally divorces
the two. How Dino gets himself wedged into
this mess is the stuff of labored farce. The
two Rat Pack buddies have done this so many
times they barely rouse themselves to mix
the highballs, with only the presence of
Frank's daughter Nancy, in a supporting
role, stirring the fatherly spark. Trini Lopez
contributes a song, in the aforementioned
nightclub, and Cesar Romero has a buffoonish
role as a do-everything Mexican local official.
The whole enterprise has the air of hedge-betting
about it, and everybody looks as though they're
fulfilling a contractual obligation. --Robert Horton