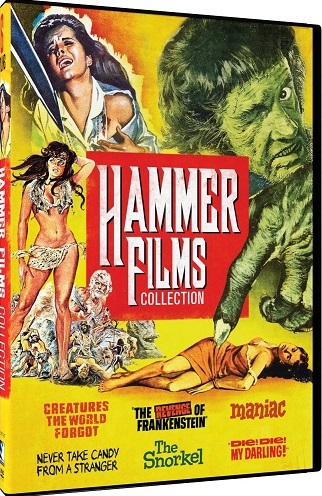 6 movies from the Hammer production company! 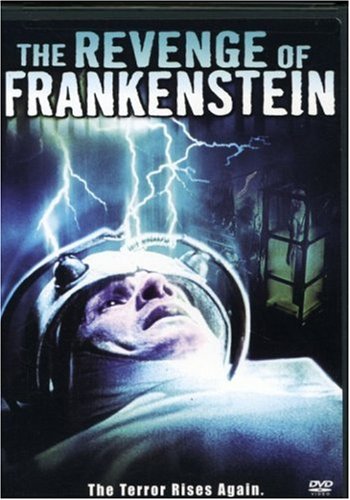 This is surprisingly good! A twist on the old story where
it's after the monster has been done away with, and now
Frankenstein himself is slated to be hanged! After certain
events turn the good doctor loose, he gets another chance
to perfect his creation! Not all goes well for the doctor,
again!!! B

"The Revenge Of Frankenstein" shows just how good,
with the right director, and cast, a horror film can be. Most
horror film fans know that Baron Frankenstein was a lot
more interesting than his creation. Hammer, wisely chose
to follow the exploits and give more screen time to Baron
Frankenstein. Peter Cushing turns in a superb performance
as the Baron, Francis Matthews is quite capable as his
assistant, Dr. Hans Kleve, and Michael Gwynn is very good
as "Karl" Dr. Frankensteins' creation. This film picks up
where "The Curse Of Frankenstein" ended. Along with
"Horror Of Dracula", "The Brides Of Dracula", "Night
Creatures", "The Mummy", And "The Curse Of Frankenstein",
these are my favorite Hammer Horror Films. Sit back and
enjoy. John R. Tracy. - johnrtracy

Cast Of Revenge Of Frankenstein, The: 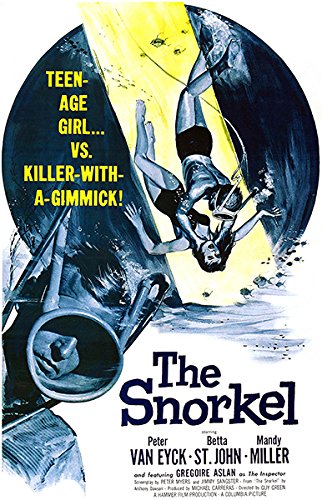 THE SNORKEL(1958): Another good movie from Hammer Films, this one is
about a girl's step-father who kills the girl's mother(his
wife) in a pretty ingenious way!! He has everyone fooled
'cept the girl!! This has a really good ending, which you'll
probably see coming, but it's still worth the watch!! B+

This is another of the underrated and seldom seen
suspense films that Hammer put out in the late 1950's,
early 60's. It has sort of a Columbo flavor to it as we see
the sinister Van Eyck very creatively murdering his wife
in the opening scenes and spending the rest of the film
attempting to convince a suspicious niece that he is
innocent. It is a very atmospheric black and white film,
a media which should be taken advantage of more even
today as a tool to establish mood. Van Eyck is superb
as the villain and the supporting cast is first rate. The
Snorkel is not really a classic but is solid and holds up
fairly well after almost half a century. Catch this one
on cable or video when you can, you won't be
disappointed. - Tom Fowler

Cast Of The Snorkel: 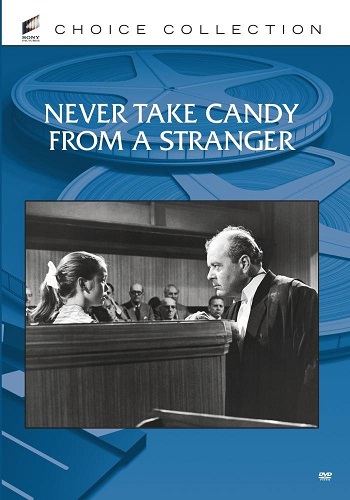 NEVER TAKE CANDY FROM A STRANGER!(1960): A couple of young girls are playing on a swing when one of
them loses her purse and her "candy money"!! The other
girl says she knows where they can get all the candy they
want!! The girl who lost her money comes home with a
story about an old man who offers candy to the kids if
they'll take off their close and dance for him!! He never
touches them, but this is very disturbing to the girls
parents and they decide to take the guy to court!
The problem is, this guy and his family basically owns
the whole town!!

The court room scene is very disturbing!!! And the only
action/horror in this movie is toward the end!

I WILL NEVER WATCH THIS MOVIE AGAIN!!! B

This Hammer film is set in Canada and it's always interesting
to hear British players sound like they're from across the
pond. Gwen Watford and Patrick Carter have come across
so Carter can take a job as the new high school principal.
One fine day the parents are startled to hear their daughter
tell that she and a friend met a kindly old stranger who had
them take off their clothes and dance in the nude.

When they go to the authorities they've got quite a surprise
from them in that they know who it is and are reluctant to
take action. It's as if Ben Cartwright in his dotage was given
to this behavior. Felix Aylmer who plays such classic good
guys as Isaac Of York in Ivanhoe and Merlin in Knights Of
The Round Table is our old pervert. Aylmer who possessed
one of the most majestic speaking voices in British cinema
is silent here.

Eventually they get their day in Canadian court, but Aylmer
and his family have juice. That only sets things up for the
shocking climax.

This Hammer film doesn't have the blood and gore associated
with the name. It also doesn't really move until the climax. It
was rather unnerving to see Felix Aylmer in such a role.

It's a sub par film and a sub par Felix Aylmer. - bkoganbing

Cast Of Never Take Candy From A Stranger: 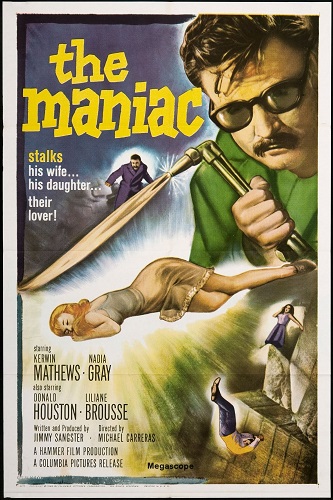 THE MANIAC(1963): Another pretty decent movie here! A girl gets assaulted,
her father tortures the dude, winding up in an asylum!!
His wife has been visiting him almost daily, 'til a stranger
comes into town and becomes her new toy!!! She gets the
guy to help her husband escape and this throws the
whole movie into an interesting bunch of twists and
turns!!! Very good movie!! B+

Hammer Studios will always best be remembered for
the horror movies they made but their ventures into
other styles were by no means negligible and this neat
little mystery is a good example of the thrillers they
embarked upon now and again. Kerwin Matthews is
Paul Farrell ,an American stranded in a small French
village in the Camargue ,where some four years earlier
a young girl had been raped and her attacker murdered
by her father ,who is languishing in prison for the crime.
The girl works at the hotel/bar where Farrell is staying
and she falls in love with the personable young American
who in turn is attracted to her mother ,Eve ,played by
Nadia Gray.Together Farrell and Eve plot to help her
husband escape and flee the country so they can
be free to pursue a relationship. The plot goes awry
and soon they are coping with a body in the trunk
of their car and mysterious activity in their garage.
The twist ending is neat and unexpected . The acting
is a little under powered but the whole thing is a neat
little piece of double bill fodder that will keep an
audience diverted till the main feature
arrives. - lorenellroy

Cast Of The Maniac: 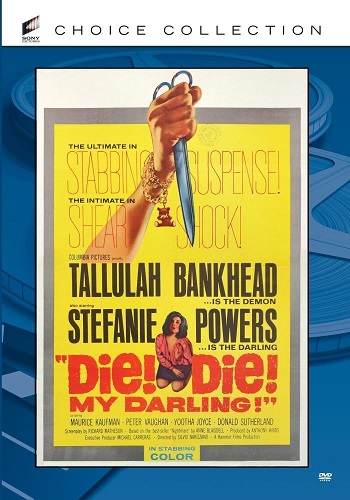 DIE! DIE! MY DARLING!(1965): Stefanie is almost unrecognizable here!! She's quite a bit
younger than when she was in her big role of Hart To Hart!!
Anyway, Tallulah plays a religious zealot who's son has killed
himself, and Stefanie plays his former fiance!! Stefanie is
on vacation with her new beau and she says that she needs
to go visit Tallulah "just for a few hours"!! Little does she
expect what is about to transpire!! Oh, and Tellulah is quite
mad!!! Also in this is a young Donald Southerland!! B

Before she marries her handsome fiancé (and becomes
"The Girl from U.N.C.L.E."), pretty Stefanie Powers (as
Patricia "Pat" Carroll) decides to visit Tallulah Bankhead
(as Mrs. Trefoile), the eccentric mother of an ex-lover who
killed himself some years earlier. Since the death of her
son "Stephen", Ms. Bankhead has been in prayerful
mourning. At first, she seems simply overly gracious; but,
rest assured, Bankhead's religious fanaticism is guaranteed
to raise hell for Ms. Powers. Delusional, Bankhead believes
"Stephen" died a virgin, and believes Powers should join
him after a lifetime of virginity. Powers isn't interested.

Luridly but beautifully re-titled "Die! Die! My Darling!" for
American consumption, seeing this film listed in your "TV
Guide" was the biggest thrill outside of "Whatever Happened
to Baby Jane?" It only had one aging ungracefully movie star,
but adds a pretty woman in peril. Bankhead did relatively
few movies, and even fewer as she grew older. You really
couldn't be sure she'd show up, and be sober enough to
perform, so each Bankhead appearance is a thankful
treasure. Of course, Powers misses many opportunities
to escape - but, take Tallulah Bankhead's incredible staying
powers into consideration. She's captivating.

Cast Of Die! Die! My Darling!: 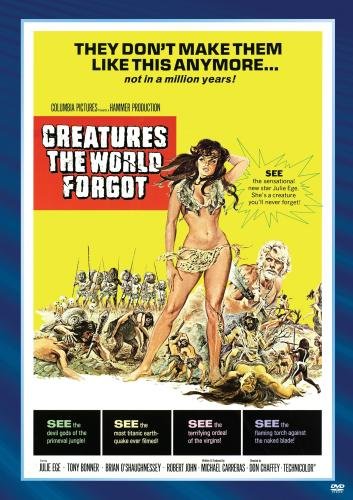 CREATURES THE WORLD FORGOT(1971): As near as I can tell, the only reason for this movie is
to show girl's boobies!!!!! No talking, No story line!
Some action that the viewer has no idea who's the
good guy and who's the bad!! But there are boobies!! B-

This is a great little film, Shot in Africa 32 years ago
it brings back great memories for its star and my
personal friend Tony Bonner........ who cares if they
don't speak! Do they really have to?????????? Looking
like that!!!!! - kellybranson (A comment here from RP!
I only chose this because it was the shortest review
available!! And really, it doesn't make any sense, as
the Kelly gave it FIVE STARS out of TEN!!!!)

Cast Of Creatures The World Forgot:

There is no music for any of these movies!!