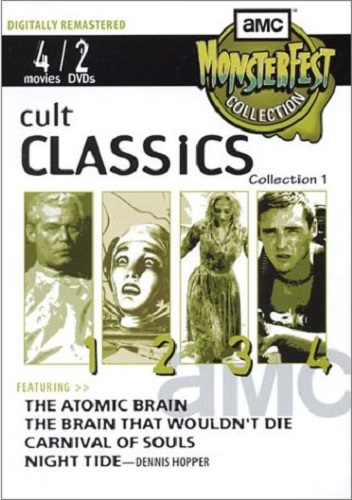 Four "b monster movies" from years gone by! 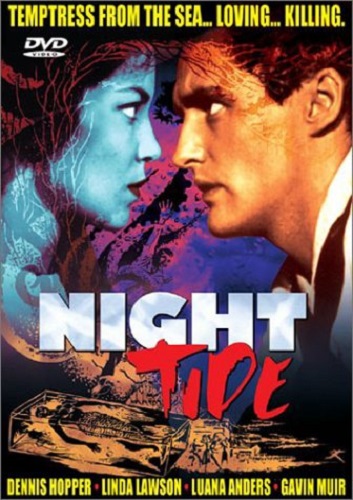 This is almost good! This feels like a foriegn film that
has the great actor Dennis Hopper! B

No ordinary cult film, Night Tide covers a variety of
different waterfronts. It's a film from the American
underground, it's a horror movie, and it's an early
example of independent cinema (before there was
such a term). Shot in 1960, it's also a strangely haunting
artifact of its time. Night Tide was written and directed
by Curtis Harrington, a member of the experimental
avant-garde of the '50s who went on to make the
atmospheric shocker Games and many an episode of
Dynasty. Mounted on the cheap, and shot on authentic
locations in Santa Monica and crumbling Venice,
California, Night Tide has a loose, lyrical quality
not found outside Cassavetes and Godard films of
the same era.

Dennis Hopper, whose youthful looks and Method
style were still intact at this point, plays an innocent
sailor at liberty in a coastal town; he falls for a girl
who plays a mermaid at the sideshow. Or is she really
a mermaid? Inspired by Val Lewton's horror classic
Cat People, Harrington cooks up a supernatural stew
with the suggestion that the willowy lass is one of the
"Sea People," called back to her ocean home by a
weird sea witch (played by a real-life occult celebrity
called Cameron). Yet Night Tide only occasionally
feels like a horror movie; with its naturalistic exteriors,
bongos, and coffeehouse atmosphere, it's more a slice
of poetic bohemia. Luana Anders, who should have had
a major movie career but later became a B-movie
leading lady, is wonderfully fresh as the good girl,
and the music score by Hollywood pro David Raksin
(Laura) is inventive and offbeat. Shown at the Venice
Film Festival in 1961, the film did not secure a U.S.
release until 1963, when its New-Wave-ish style probably
looked less innovative. Seen today, Night Tide is both
a lovely mood piece and a look back at a peculiar
moment in American moviemaking, and either way
a bit of low-cost enchantment. --Robert Horton 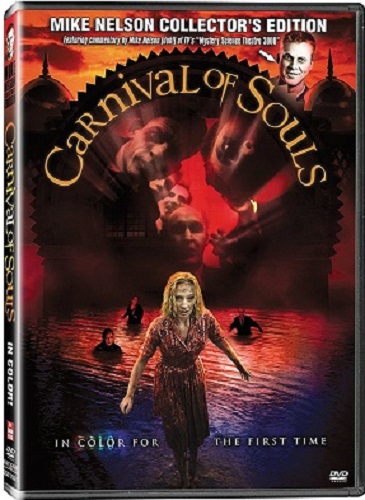 CARNIVAL OF SOULS(1962): This is very creepy, mostly due to the music! Car
with three girls in it crashes, next thing we see is
one of the girls walk out of the river, and then
watch as she tries to go on with her normal life.
NOT!!! C

An ultra-cheap B-horror movie, filmed in Lawrence,
Kansas, in 1962, with a really creepy Twilight
Zone-style premise and some great shoestring
atmosphere. Wandering into a small town after
an auto accident, to begin her new job as a church
organist, young Mary Henry(Candace Hilligoss) begins
to pick up strange vibes: none of the normal people
in town seem to be able to see her, and she keeps
being accosted by freakish pasty-faced types who
seem to be dead on their feet. The nightmarish finale
benefits from its one-of-a-kind "found" setting, an
empty amusement park rising like a ghostly castle
from the prairie landscape. This is much less
aggressive and violent film than George Romero's
original Night of the Living Dead, but for sheer
skin- crawling spookiness, it's in the same
class. --David Chute

Cast of Carnival Of Souls: 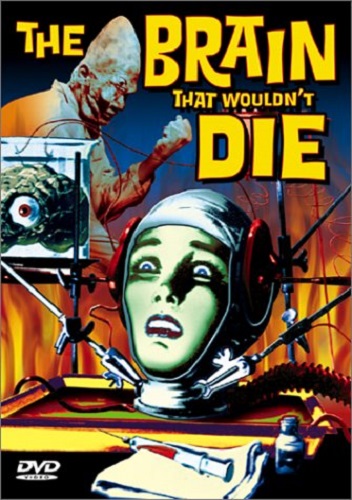 BRAIN THAT WOULDN'T DIE, THE(1963): This was CREEPY! Again, a "b" movie that tries to do
good, with a couple of the actor/actresses doing their
best! Story was interesting. C+

A scientist is driving around with his gorgeous girlfriend
and everything's hunky-dory until he wrecks the car and
her head goes flying off. Not to be discouraged, he wraps
the decapitated noggin in his jacket and scurries off to his
lab, where he keeps the poor woman's head alive in a
developing tray with some coils and tubes running in and
out of it. With his girlfriend's still-conscious cabeza back
at the lab, the good doctor drives around shopping for
bodies, ogling women who might make likely candidates
for reattaching the head. Finally he finds a model with
a gorgeous bod (and leopard print bikini), but a scarred
face. He convinces the young woman that he can fix
her looks with plastic surgery and convinces her to go
back to the lab. Meanwhile, his girlfriend-head (silenced
by a strip of duct tape over her mouth) has developed
telepathy and a nasty grudge. This movie used to regularly
leave late-night TV audiences aghast and scare the bejabbers
out of the young'uns. Decades later, it's an indispensable
trash classic, complete with a catfight, a pinhead monster,
a deformed assistant, and even a spatter of gore. Make
no mistake; this incredible, sleazy gem is a must-see for
any self-respecting fans of camp cinema. They just don't
come any better, and they definitely don't make 'em
like that anymore. --Jerry Renshaw

Cast of The Brain That Wouldn't Die: 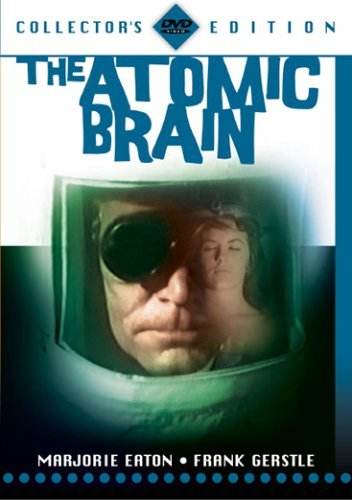 ATOMIC BRAIN, THE(1964) Pretty low budget movie(duh). Story has merit, and the
actors do as much as they can to save this sci-fi "b"
movie! B

Somehow, atomic power is harnessed to transplant brains.
An old woman uses this power to hire two sexy (and one
homely) foreign housekeepers with the idea of transplanting
her old brain into a sexy woman's. Written by Jonah
Falcon